What are the mascots for the 2013 Sweet Sixteen? Glad you asked. Here's they are, listed by region. (True students of mascotolgy will note that some of them don't have a mascot and some mascots don't match the team nickname.)

If this list doesn't satisfy your need for mascot info, check out the Sweet 16 breakdown by mascot and team name. (Yep. They're different lists.)

This Google Doc has the Sweet Sixteen and the other mascot lists from 64mascots.com

Shaka Smart was on the Dan Patrick Show (a well-listened to nationally syndicated radio show) this morning. A few things caught my ear:

*His only hobby: collecting quotes. He has about 120 pages of quotes, which is uses with his team.

*He also likes to use movies, funny and inspirational.

Dan said that was too deep and asked for another.

Combining the use of quotes and movies, Smart went to a line from Scarface. Tony Montana, under the influence, says, "There goes the bad guy."  He likens this to people doubting VCU and used it to motivate his team.

I thought this was sweetly ironic, in light of one the Kansas Jayhawks' Morris twins smack-talk before the Kansas-VCU tip off.

If you haven't heard about that, here's a clip from an AP story on Yahoo!Sports after that game:

"Once again we felt like nobody really thought we could win going into this game," said VCU coach Shaka Smart, the budding star of the tournament. "Our guys have done a phenomenal job of putting all the doubters aside, all the people that didn't believe in us, and going out to do their job."

VCU guard Joey Rodriguez counted one of Kansas' vaunted Morris twins — Marcus or Markieff — as one of those many doubters. During a pregame captains meeting with officials, Rodriguez said one of the brothers offered him some parting words: "The run ends here."

There goes the bad guy. 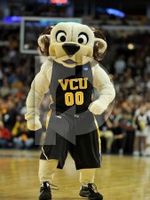 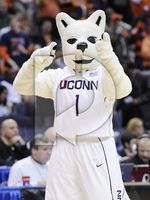 Costumed Mascot: The Wildcat (not Scratch)

(The Butler, VCU and UConn pics are affiliate links to Replay Photos.)