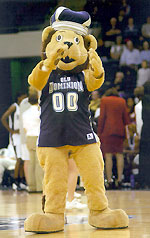 Old Dominon doesn't have any Diaper Dandies this year, so Big Blue could've left the baby powder at home. Instead, he caused an almost 10-minute game delay at the start of the Colonial Athletic Association's title game between Old Dominion and Viriginia Commonwealth on Monday, March 7th.

The powder from his LeBron inspired pre-game ritual mixed with the moisture from the fog machine, causing  VCU's Ed Nixon to slip after just two minutes of play.

Before that, the arena was rockin'. Play came to a screeching halt as a mop and towel brigade tried to dry the floor.  (For the full story, check out this rivals.com story.) The VCU coach was not happy.