Tonight's Mascots: Louisville's Louie the Cardinal Bird vs. Michigan's Nothing

The college basketball season ends tonight. Sigh. #1 seed Louisville meets #4 Michigan. I have no ties to either school, so I'm simply hoping for a good game. However, given my affinity for mascots, I'll consider the game through a mascotological lens. In the mascot battle at tonight's championship game Louisville is the clear winner because Michigan doesn't field an actual mascot. That was easy.

As a bonus, Louie is also active on Twitter @LouietheCard (Especially appropriate since he's a bird.) He'll be busy tonight and tomorrow night since both Louisville's men's and women's basketball teams in a national title game.

Louie the Cardinal Bird of Louisville has no competition tonight at 2013 NCAA Men's D1 Basketball Championship because Michigan doesn't have a costumed mascot. The game will be a closer contest.

But, if you want to buy college duct tape for the game, Michigan is your school. (Affiliate link below.) 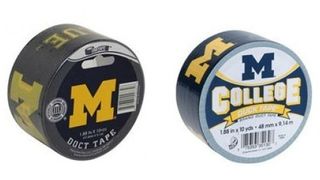 You can,however, buy a Louisville Wallcrasher to adorn your walls. (Affiliate link.) 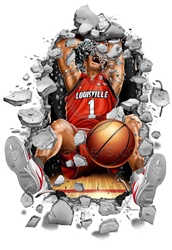 One final affiliate link is for this year's 2013 Final Four and tourney gear.