Prepared for the puparazzi? Butler Blue 2 in TMZ Sports

Butler's live Bulldog mascot, Butler Blue 2, is leaving on a jet plane* for his 2nd consecutive Final Four appearance. TMZ ran this sweet composite pic with their article about Blue. 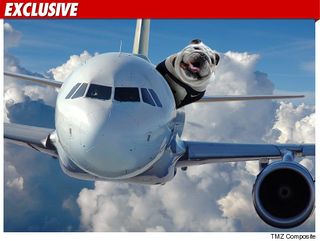 Due to NCAA regulations, he has not been at Butler's other NCAA Tournament games, but he was cleared for the Final Four shortly after Butler made it in. Of course, he broke the news on Twitter.

BTW, Blue has flown before to the IZOD Center (Meadowlands) for the Butler-Duke game in December 2010. (Duke won by 12.)

and finally, a blog Life and Times of Butler Blue 2. (The last update was August 2008. Safe to say he's evolved with the times.)

*3/31/11 Correction: Blue will be flying on a fan-chartered plane, not the team plane.