WASHINGTON — Mascots can't two-step together at the men's NCAA basketball tournament. So how is it we call this the Big Dance?

Hink the Bulldog and Roc the Panther were chastised for a mascot dance-off during the Butler v Pittsburg game this past weekend. Not only does Erik Brady's USA Today article recap the rule-breaking, it goes behind the scenes with Hink, Roc and Jonathan the Husky from UConn, giving us a glimpse into mascot life. The reality TV show can't be far behind.

64mascots.com now has the updated list of pairings for the 2011 Sweet Sixteen Mascots. Here's a quick overview:

Two wildcats (One team has two cats, so could be three wildcats total.)

Two rams (Though only one team named rams. Hmmm...)

Two warriors (One also has a jaguar sidecick.)

One mythical bird (May have a Big and a Baby appear at games.)

One alligator (They sometimes travel in twos, though.)

Can you name their respective schools without peeking?

Blue2, Hink and Ron5Robot ask, "How ya like me now?" as they prepare to dance.

Who Let the Dogmasks In?

What's up with the Bulldog masks at the Butler vs Old Dominion game? Students of Butler will have these masks supporting Butler Blue 2, their live English Bulldog mascot (not to be confused with Hink, the costumed Bulldog mascot) isn't allowed at the game.

Blue 2 will not be at the game due to an NCAA rule that only allows live mascots at the Final Four, where was he last year when Butler almost beat Duke. Not doubt he will be tweeting  @ButlerBlue2 and posting on his Facebook page during the game. 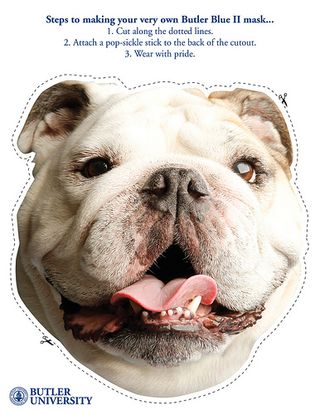 Butler Blue 2 - Dog Not Gone to the Tournament

Butler's live Bulldog mascot, will not be going to the NCAA Championship tournament 2nd and 3rd round, but that won't stop @ButlerBlue2 from mounting a social media campaigin to #freeButlerBlue2. 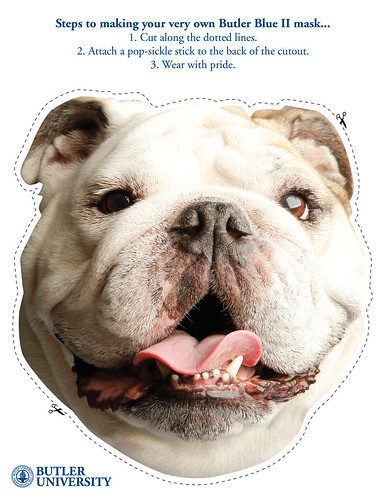